Train With The Pros Who Ride For A Living!

Rick is a retired Maryland StateTrooper, who retired as a Sergeant in 2005. During his distinguished and impressive thirty-year career in law enforcement, Rick spent twenty years as a motor officer.  Back in 1986, he was a driving force behind bringing motorcycles to the patrol programs within the Maryland State Police, after their use had been discontinued in the early 1960s.    Rick learned to ride at age eight and became a licensed rider at seventeen. While serving as a motor officer, he developed his appreciation of all motorcycle brands.  He rode a variety of Harley Davidsons, Kawasakis, and BMWs as his patrol motors.  This influence is evident in the mix of motorcycles in his personal collection today. Rick and his wife previously owned and operated a motorcycle education business called “The Flying Wheel,” where motorcycle enthusiasts learned about proper riding apparel and safety equipment, applicable motor vehicle law, motorcycle servicing and transporting, and other topics. This course helped riders gain an understanding of safety, maintenance, and rules of the road. He completed his initial motor officer certification through the United States Park Police in Washington, D.C. Rick also earned his instructor’s accreditation through the Motorcycle Safety Foundation, and again through the Maryland State Police.  As a recognized and skilled rider, Rick has represented his agency multiple times in various Police Motorcycle Safety competitions on the east coast.  He also had an opportunity to compete in the Dallas, Texas, area, and has had the fine distinction of participating in the Police Motorcycle Road Racing World Championships in California. As a Sergeant with the Maryland Transit Police, Rick was asked to take responsibility for their patrol motorcycle program.  He subsequently developed the motorcycle officer’s operational manual and related SOP documentation.  He also defined purchasing specifications for new motorcycles. Today, when Rick is not teaching and sharing his love of riding with others, he’s off on adventurous road trips with his wife, who is also a motorcycle owner and rider.  Rick’s belief is that as long as the roads are clear, it’s time to ride! 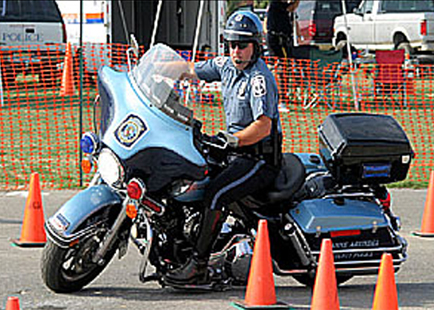 When it comes to motorcycles, Chuck Dalton is about as well rounded as they come.  He’s spent an impressive amount of time learning, riding, and teaching motorcycle skills.  Chuck’s been riding for over thirty years, starting with ATVs and dirt bikes before he was old enough for a street ride.  Since he earned his motorcycle license at sixteen, he has owned several street bikes.  His 2005 Harley FLHT takes him just about anywhere he wants to go  .  He loves taking long distance motorcycle trips and attending a host of east coast events geared towards motorcycle enthusiasts.   Chuck takes pride in his nineteen years as a police officer in Maryland.  He’s spent 10 years of that time as a Motor Officer, which has allowed him to gain extensive experience as a rider and teacher.  It’s hard to believe, but he’s actually completed more than 240 hours of advanced riding and instructor training for all types of motorcycles.  Some of his training includes:
• 80-hours Basic Motor Officer Course
• 16-hours Advanced Tactical Motor Officer School
• 120-hours Police Motorcycle Instructor Course
• 21-hours BikeSafeMD Assessor Course
• Levels 1 & 2 California Super Bike School
You may be thinking that he’s practically written the book on motorcycle skills, and that’s about right!  In fact, Chuck was responsible for re-writing the Department’s motor officer training courses, to include updated training requirements. He is currently an integral part of training initiatives in his own department and is often asked to help with programs throughout the state of Maryland.